It was noon on a Saturday, the sun was out, the sky was clear, and I was walking into my first caucus.  I felt a little nervous, but a whole lot more intrigued and excited.

I told myself, that I would follow Yoda’s advice of , “Do, or do not.”  I’d been thinking about it all week, so why not play my part as an American citizen, a mother, and most importantly an advocate in the blind community.
Let me rewind to 1992.  I was a shy fourth grader learning for the first time about the presidential election.  I remember that day like it was yesterday.  Our school was having a mock election.  The teacher handed us our sample ballots.  Like everything else given to me in print, my ballot had been blown up, and it was still a struggle for me to read it.  Once again, my low vision was keeping me from fully participating in something else sighted people did easily.  At 9 years old, I just assumed that I would never be able to independently vote for the president of the United States.
Fast forward to 2001.  Just a few months before my 18th birthday, both my parents became naturalized citizens.  Because of the fact that I was still a minor, I automatically became a citizen too.  At my interview and swearing in, the agent asked me if I was excited to be able to vote.  Still shy, I simply smiled and nodded.
Fast forward a little more into 2006.  I had just started my training at the Louisiana Center for the Blind.  I was learning how to read Braille, how to use accessible technology, and how to travel independently and confidently with a long white cane.  Most importantly, I was learning the philosophy of the National Federation of the Blind, that with the right training and opportunity blind people can participate actively and equally with their sighted counterparts.  Just weeks after arriving at the training center, I flew with my fellow students to the annual Washington Seminar of the National Federation of the Blind.  This has become my favorite event of the organization.  This is where we put words into action, where the rubber meets the road.  This is where we meet with our elected officials and push for legislation furthering our independence as Blind Americans.
Yesterday was February 20, 2016.  Yesterday, I participated in my first caucus.  feeling slightly nervous, but a whole lot more intrigued and excited about the process, I was ready for anything!  I carried a large tote bag full of snacks, water, and two fully charged iPads.  Why the iPads?  To entertain my children, of course.   After the confusion of which line to get in, standing in that line for 40 minutes in the hot Vegas sun, being told we weren’t registered (even though we’d made sure we were registered as Democrats and preregistered to caucus), we finally found the correct line, registered, got our ballots, and headed in…
The caucus process itself was pretty tame.  It was nothing like the videos I have seen of Iowa’s.  I sat in a room with about 50 people from my neighborhood.  There were a few heated moments when it came to counting who was voting for whom, but over all very neighborly.  Asides from my children squatted on the back wall, I would say at 5 feet 2 inches, and 115lbs, I was the smallest person in the room.  Hillary supporters sat on the left, and Bernie supporters sat on the right.  We counted off, and our room final count was 26 for Hillary and 22 for Bernie.  After the math was done, we had 6 delegate seats, 3 for Hillary, 3 for Bernie.  Next came time for selecting the 6  delegates who were to represent us.  I’m sure no one expected the petite woman in the back of the room to be the first to stand up and volunteer to serve as a delegate.
Holding my long white cane, this is what I said.  “Hello, my name is Terri Rupp.  I would like to volunteer to be a delegate.  You probably don’t realize that this paper ballot I’m holding is completely useless to me.  I am a member of the National Federation of the Blind, and active advocate for equality and accessibility for blind people.  I will not only be representing my precinct, but I will be representing blind Americans who should have access to the right to vote independently”
In just over a month, on April 2nd, my 33rd birthday, this little woman will be once again bringing awareness and educating her fellow Nevadans with her big voice. 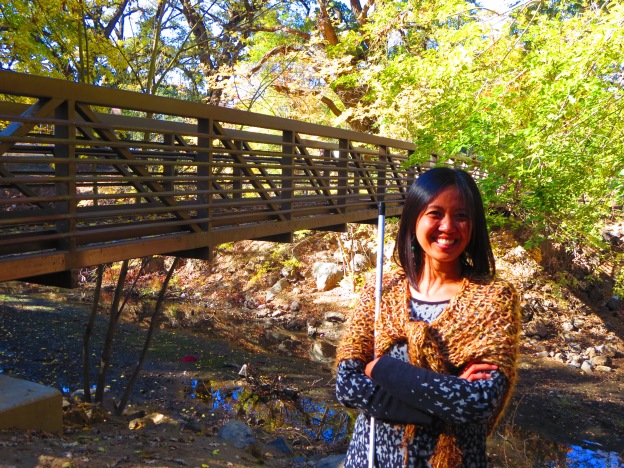 My boy in his happy place #SummerChallenge @lvccld
Photo of my beyond limits running jackpot ultra race metal, 100 mile buckle, 100 mile sticker, and race big. #Runstoppable #BetBigRunLong #NotJustABlindMom
Instead of our usual #Homeschooling lesson for science, we’re celebrating #EarthDay! Here is the photo of the trash bag we filled up from our 2 hour walk. What’s your family doing to celebrate Earth Day?
“We delight in the beauty of the butterfly, but rarely admit the changes it has gone through to achieve that beauty.” Maya Angelo
No matter how far the distance, no matter how high the climb, we are unstoppable! Join us as we walk/ run/ride to raise funds for #BrailleAcrossAmerica
Today in our homeschooling day my little boy is starting his first Braille lesson. Jackson is not blind, but has a mama and sister who are. He wants to be able to write notes to his sister, and a Mother’s Day card to his mama in Braille.